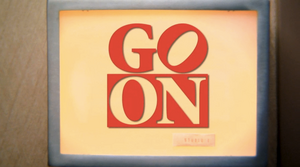 Go On is an American sitcom that premiered on August 8, 2012 on NBC and is currently airing its first season. It was created by Scott Silveri and was produced by Silver & Gold Productions, Dark Toy Entertainment, and distributed by Universal Television.

After the death of his wife, Ryan King (Matthew Perry) enters an employer-mandated group therapy session for grief counseling called Transitions. Although initially skeptical of the idea, King realizes the healing power that friends and honesty can bring.

The group is led by Lauren Schneider and features an eccentric group of people who have also faced loss recently in their lives, including fellow widow Anne, the shy Owen who is struggling with his brother's coma, the bizarre Mr. K, and the neurotic Yolanda who is trying to recover from her parents' divorce.

At the office, King has the support network of his best-friend Steven and assistant Carrie.

The series is currently airing its first season on NBC. It premiered August 8, 2012 after the Summer Olympics to 16.10 million viewers.

Retrieved from "https://go-on.fandom.com/wiki/Go_On?oldid=4213"
Community content is available under CC-BY-SA unless otherwise noted.